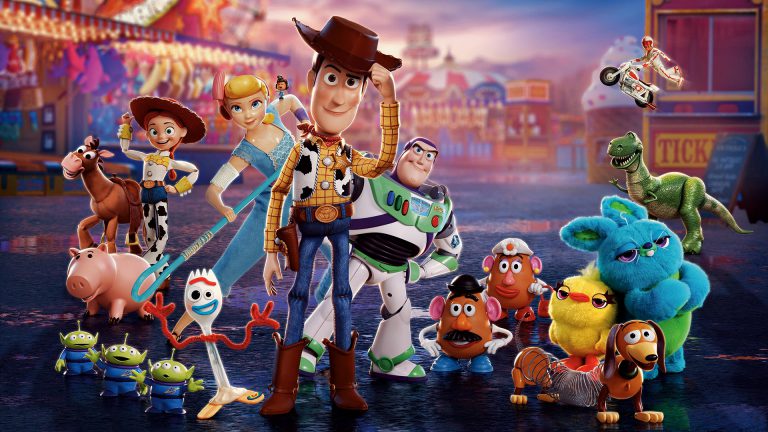 The Toy Story franchise has always been close to my heart. The first movie really showed of that characters made out of 3D-models could actually tell a story and show emotions. That first movie was a landmark in film which will be talked about for more than hundred years from now. In the meantime the series contains four entries and now is a great time to discuss which one is the best and which one is not that good.

A full feature computer animated movie that is actually good and fun to watch? No way! Well, hell yeah! Because Toy Story knocked it out of the park. The story is about Woody who is the favorite toy of his owner Andy. However, Andy gets a new toy at his birthday in the form of Buzz Lightyear and the battle between the two begins. During this amazing journey Woody and Buzz become best friends and that’s what the movie is about: friendship. The animation in this one is a bit goofy for nowadays standards, but the story and whole experience overall still holds up. This is a classic!

To be honest, this sequel is the worst movie of the franchise in my opinion. Albeit still a very good one. The story is about Woody, who got kidnapped by a geeky collector. The collector wants to sell this ‘rare’ item with the rest of the set, but Buzz and Woody’s other friends hate to see one of their besties go. We get introduced to Jessie and Bullseye and Buzz Lightyear actually encounters his nemesis. There’s a lot happening here, though it feels like the story isn’t just that good as all the others in the series.

After eleven years, the franchise came back with a bang! Toy Story 3 teaches us, the viewers, that times are changing. Andy grows up and goes to college so the the toys will be left alone and are eventually donated to a daycare centre. In the daycare centre there is a power hierarchy like no other seen before and the gang isn’t used to that. What seem to be friends could also be enemies and living in a daycare sees to be a pretty hard knock life. This movie says farewell to the life inside a child’s dorm and opens up an entire new exciting world. The movie even won an Academy Award for best animated film. That’s probably because of the hilarious Spanish Buzz Lightyear, right?

And then there was a fourth one. How could this possibly go well? Well, it’s actually pretty entertaining. This fourth movie is all about the pursuit of Forky, Bonnie’s new toy who is kinda suicidal. Woody and the gang are determined to get him back when he does another suicide attempt. And off course, the gang embarks on an unforgettable adventure in which they encounter Bo Peep again and off course some hilarious newcomers. Toy Story 4 is a fresh entry in the series that deserves every attention.

Update: Dive into realism with Lightyear!

What if… Disney would actually make a movie that stars the fictional Buzz Lightyear and the movie the original figurine is based on? Well, that just happened! In 2022 Disney released a new animated feature film based on the fictional life of tv hero Buzz Lightyear. It tells the story of an arrogant Buzz who keeps screwing up his job. It’s a quite interesting flick, but it’s so different from the main series. It just doesn’t hit the same chords, which makes this entry a little bit forgetable. It’s a must see for fans of the series like me, but otherwise there is not much special to see here. Currently Lightyear is available on Disney Plus.

So, which one is the best?

So in the end if you need to rank all the movies, I would say we start with the second one at the bottom, followed by the fourth flick. The first movie would come in at second place and the third movie is the one which shines the most. Seems about right, or not? And after the release of Lightyear, I can definitely say that this new odd flick is the worst of the bunch and comes in at number five. It’s still enjoyable, though…