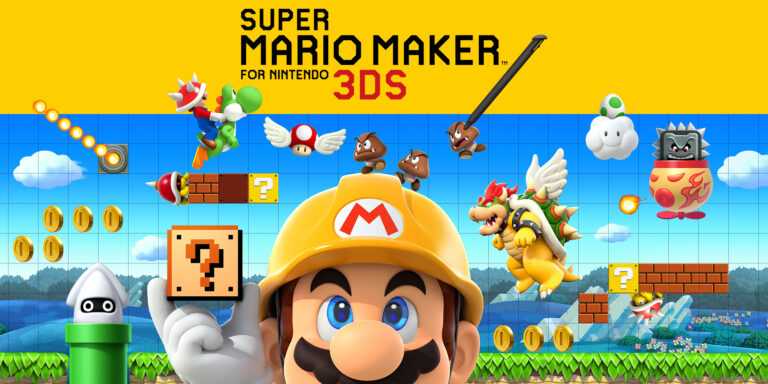 Super Mario Maker is a great game for Wii U and it even spawned a better sequel for the Nintendo Switch. However, during a week of being sick, I discovered a barely played copy of the 3DS version of the game. I decided to dive in and after a few hours I was pretty surprised why this game doesn’t get the attention it deserves. Here’s why!

So this neat little game contains over a hundred levels made by Nintendo staff and users all over the world. The single player campaign is legendary and comparable to every big 2D Super Mario adventure we all know. Every level cranks up the madness and makes the game more challenging. You can’t imagine how weird the levels become while you advance through the campaign.

Yep, this version of the game does not include the function to share levels with others over the internet or with the Nintendo Wii U version. A missed opportunity if you ask me. The level sharing function was the aspect that made the Wii U version an instant classic and an endless source of incredibly fun gameplay. This makes creating levels a bit pointless, because you can only share them with your close friends. Nintendo probably knew it was developing the sequel for Nintendo Switch. And they didn’t want to have players hanging around playing their old games. A common practice by the big N.

It’s clear to see that Nintendo was experimenting with developing video games for both consoles and handhelds. Hence titles released on both Switch/Wii U and 3DS like Fire Emblem Warriors, Donkey Kong Country Returns, Captain Toad: Treasure Tracker and Yoshi’s Woolly World. However, Super Mario Maker for Nintendo 3DS could’ve been perfect with an endless amount of levels to play. Now it’s just a fun 2D Super Mario diversion that’s stuck on an abandoned handheld. Go play it, though!