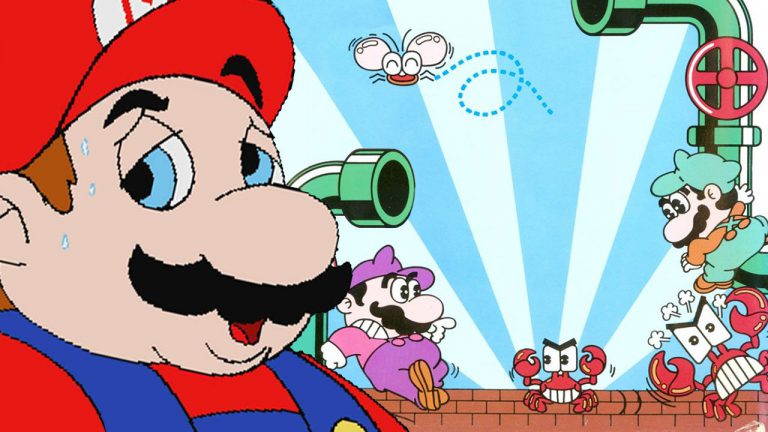 Mario Kart Tour and Dr Mario World are almost coming to iOS and Android! Though Super Mario being considered a Nintendo-exclusive character, this won’t be the first time he’ll appear on a third party platform. Here are 8 cases of Super Mario starring on Non-Nintendo systems.

Nintendo’s video game success started in the arcade. Mario, formerly known as Jumpman, starred in 1981’s Donkey Kong. Two sequels later he got his own game called Mario Bros in 1983. So in the years that followed many arcade spin offs and versions were created. But as we all know Mario’s biggest success came later on Nintendo’s own consoles and handheld systems.

Before the NES was released Nintendo made versions of their arcade hits for third party platforms. For instance they released different versions of their Mario Bros and Donkey Kong arcade hits. For example for platforms of other manufacturers like the Atari 2600, Apple II, Commodore 64 and many other systems. Unfortunately most of these ports were inferior to the original arcade version. Yup, Nintendo wasn’t that picky back in the day.

During the mid-nineties Nintendo ditched Sony in favour of Philips in their search for a CD-ROM enhancement for the SNES. The product never came to market, but Phillips was contractually allowed to use Nintendo characters in CDI games. Three horrible Zelda games were made by third party developers and Mario also suffered the same fate. To this day Hotel Mario remains an insult to Nintendo fans worldwide.

In the same time period Nintendo also let other third party companies develop a handful of Mario edutainment games for the PC. Mario’s Time Machine, Mario Teaches Typing and Mario is Missing are a few examples of these pretty forgettable titles. Nintendo even released a couple of them on the Super Nintendo. However that didn’t make them any less awful to play.

Nintendo tried to conquer the casual PC game market in the nineties. They did this with titles like “Super Mario Bros. & Friends: When I Grow Up ” and “Mario’s Game Gallery”. Both games are pretty terrible. But at least Mario’s Game Gallery did have Charles Martinet voicing Mario for the first time. Who knew that the iconic voice of Mario was born in such a casual PC title?

Over the last two decades Nintendo games have appeared in the arcades every now and then. However there were three Mario Kart Arcade GP machines that are a blast to play on. Developed by Namco Bandai, these versions of Mario Kart even feature characters from Pac Man and Tamagotchi. If you run into one of these machines, go ahead and play a couple of rounds. You won’t regret it!

Mario Kart Tour and Dr. Mario World aren’t the first Super Mario titles on Android and iOS mobile platforms. However at the end of 2016 Super Mario Run landed on iOS platforms and later in 2017 the game became available for Android platforms as well. In this 2D platforming game Super Mario automatically runs to the right and the player has to tap the screen to make Mario jump. Although it was a great game, it wasn’t the big success Nintendo would have hoped for. Let’s hope Dr. Mario World and Mario Kart Tour will become the big successes the franchise deserves, right?

Nintendo had a way of handeling it’s properties in China. We’ve seen the IQue in the past bringing numerous Nintendo 64 to the land of the sleeping giant. However Nintendo actually (co-)developed the iQue, so the games Super Mario published on it aren’t featured on this list. The ported Super Mario games that made there way to the Chinese version of the Nvidia Shield do so. So both Nintendo Wii games Super Mario Galaxy and New Super Mario Bros Wii made their way to the Chinese digital Nvidia Shield storefronts and are therefore playable on a system which isn’t developed by Nintendo. Albeit through emulation, this is still an example of Mario jumping on a Non-Nintendo gaming platform.