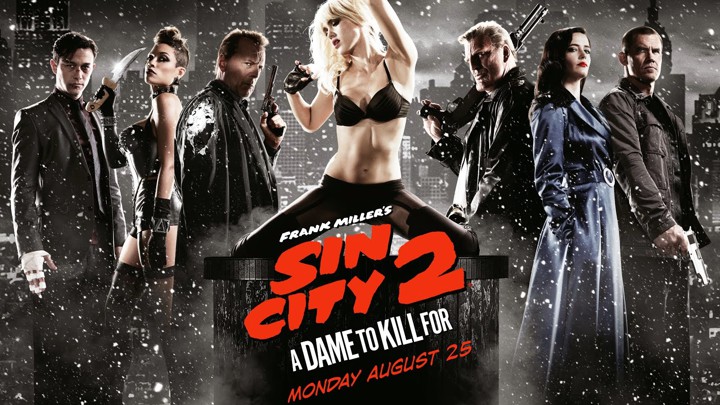 The original Sin City movie was released in 2005 and wowed the audiences with impressive special effects; stylish film noir visual effects and multiple great stories. So in 2014 the release of Sin City 2 should’ve topped that with ease right? Well, unfortunately not. Sequels are often a lot worse than the originals, but Sin City 2 takes this to the extreme. In this article I will give you six reasons why Sin City 2: A Dame to Kill For was so much worse than the original.

Sin City and its sequel are based on the Sin City graphic novels by Frank Miller. Being a graphic novel, the series consists of seven books. Six of them are actually singular stories that play out in the same universe. The seventh book, which is actually the sixth in the series, ‘Booze, Broads & Bullets’ contains multiple short stories which play out in the same universe. However, the first movie is based on only three stories of the graphic novel series. ‘A Dame to Kill for’ is mainly based on the second book, while two other stories were solely created for the movie. In other words: The first movie follows the original graphic novels more faithfully, as the second one doesn’t that much.

The black and white visual style of the first movie was quite a novelty by the time it was released. Almost ten years later, when the second movie came out, the visual style wasn’t that spectacular and new anymore. The visual style emits some sort of high quality standard, which ten years later just wasn’t there anymore. In almost a decade we’ve seen trainwrecks like ‘The Spirit’ prove that a film noir visual style doesn’t mean the movie is good one.

Let’s begin to look at the actors and their acting. It’s maybe a little rude to state that the first movie had better actors working in their prime years, but I think that’s pretty much how it works. The first movie’s bill is really nice, while the second one is a little bit more than ok. I’m not a sucker for star power, but the great audience is and it’s probably the reason why this movie did a lot worse than the first one. Also the status of both directors of the movie took quite a hit the last decade.

While watching the movies, you might have noticed that some objects or characters were displayed in color instead of in black and white. While this happened pretty subtle in the first movie, they threw the concept overboard in the second one, by even coloring in a whole character. It looked a bit awkward and didn’t make a strong visual appearance compaired to the first movie. The gimmick was used less subtle and the effect it once had was gone.

Let’s be honest. People always compare a sequel to their predecessor and so do I of course. While it might be a fact that sequels on average are of lesser quality than the originals, but that doesn’t mean every second or third movie in the series is a lot worse than the original. There are a lot exceptions to this rule like The Dark Knight and Spider-Man 2. The last one even didn’t have a better box office than the first movie, but is widely regarded as the better one. So a sequel will probably always be compared with the first one. This will most of the time influence the way people rate the movie in a negative way. That being said, A Dame To Kill For just wasn’t that good.

Off course, this goes for all movies releasing in a certain period. A movie’s success is partially depending on the competition it has during its release. Movie-goers only have so many opportunities to go to the cinema. So they have to make choices which film to watch. Sin City released at the end of August 2014. A few weeks afront its release ‘Guardians of the Galaxy’ made its way to the big screen and was a huge hit. Also the first new TMNT movie was released in the same peruid. With ‘Dawn of the Planet of the Apes’ releasing a month earlier and the release of ‘Amazing Spider-Man 2’ at the same time. Busy times at the cinemas, right? These and a ton of other succesfull movies are all fishing in the same pond and apparently did a better job at it.