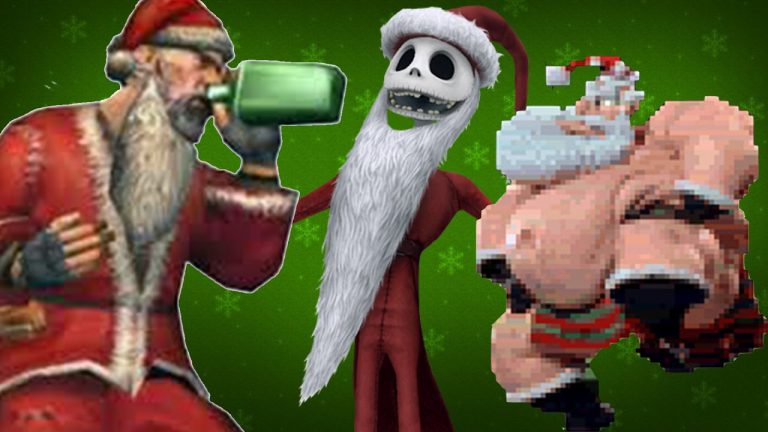 Christmas is here and apart of seeing our families, we get the chance to dedicate some time to our favorite activity: Gaming! But how do you stay in the christmas spirit? Easy all you need to do is play Christmas Video games! Here are 10 games in which you can meet Santa.

Let’s get this one out of the way as quickly as possible, Santa has been the victim of a small but very bad group of shovelware games. And while you probably already guessed it, none of these are any good. Santa Claus saves the earth; Santa Claus is coming to town; We wish you a merry christmas and of course Elf Bowling 1 and 2 are all pieces of shit!

The nineties had a lot of good and a ton of shitty fighting games. One that falls somewhat in the middle is Clayfighter 63 ⅓ for the Nintendo 64. This one features a lot of hilarious characters like Earthworm Jim, Boogerman, an angry snowman named ‘Frosty’ and of course Sumo Santa. He is an evil duplicate of Santa Claus that is the archenemy of the game’s posterboy Frosty.

The first episode of Sam and Max Season 2: Beyond Time and Space revolves around Santa who lost his mind and barricaded himself in his office with a machine gun. It consists of a couple of hours of gameplay and contains a few surprisingly clever puzzles that will certainly entertain you. The episode plays around with some of the elements from classic Christmas stories like for instance ‘A Christmas Carol’.

Toejam and Earl is a SEGA classic that everybody needs to play. The game is about two alien rappers who crash-landed on earth. Although the gameplay seems boring for today’s standards, but the vibe, the crazy music and the humour are timeless. In the game you collect multiple items like presents for example.

Right after the release of the first Metal Gear game, Kojima developed the cyberpunk classic Snatcher. The game later got an enhanced version that was released for the Playstation, SEGA CD and SEGA Saturn. This game also contains a cameo by our lovely Santa. One of your informants disguises himself to escape from the clutches of the evil Snatcher robots that have come to dominate the city.

Square’s Secret of Mana might be one of the least obvious games to feature a Christmas sidestory, but it does. In this classic Super Nintendo RPG Rudolph the Red-Nosed Reindeer tasks you with rescuing Santa Clause from a curse. Traveling through the winter wonderland, you have to battle all sorts of enemies and in the end you’ll even encounter mister Claus himself.

You might have missed this one, but Daze Before Christmas was the ultimate Christmas themed video game back in the day. Norwegian studio Funcom developed this game especially for the two most exciting days of the year, but it was only released in PAL regions for the Super Nintendo and Megadrive. In Daze Before Christmas you play as Santa and you have to collect a number of presents. This colorful platformer takes you through some cold and frosty landscapes that will definitely get you in the mood for christmas.

A long long time ago Saints Row was more or less a copy of the GTA series. With the third and fourth game in the series things got more humoristic. Saints Row IV even has a DLC expansion that lets you save Christmas. The protagonist has to save Santa from the Matrix-like Steelport simulation, but he doesn’t really understand urge of the situation.

Kingdom Hearts is a series full of Disney properties and one of them is The Nightmare before Christmas. In Kingdom Hearts 2 you are accompanied by Jack Skellington and roam through Halloween Town. Jack wants to take over Christmas and you will join him by going to Santa Claus in Christmas Town.

Shenmue has a somewhat infamous status in the videogame industry. Not only was it one of the first 3D open world sandbox games, but it also held the record for being the most expensive video game ever made at release. In this SEGA Dreamcast classic you take on the role of Ryo Hazuki and you investigate the murder of your father.